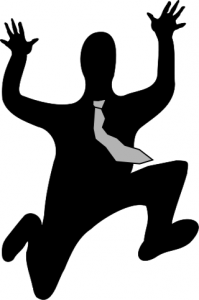 If you’re acting like a deer caught in the headlights, relax – you really can feel fear and do it anyway!

Entrepreneurs are risk-takers by nature. But even people brave enough to start their own business can be paralysed by fear at different points. Happily, there are ways to overcome this.

Andrew Roberts, founder and director of The Hive, knows that feeling. Within months of investing $85,000 in a business coaching franchise, he found himself overwhelmed by fear.

Two years later and $180,000 in debt he was ready to go bankrupt. “I was going to networking events telling people that I’m a business coach yet I couldn’t afford to, literally, put food on my table. I felt like an absolute fraud.”

He sought the help of a mentor and began confronting his fears of not being good enough. “Within two months I had a business turning over about $30,000 a month and within two years I had 25 team members and $300,000 a month in turnover.”

“It’s amazing how fast it can happen for you when you actually understand that fear is the major thing holding you back.”

Naomi Waring, owner of Paperwork Pixies, a bookkeeping, marketing, web design and organisation service for small business in Victoria, ran headlong into a fear barrier when it came to employing her first staff member.

At the time she was working seven days a week and baulking at taking on any extra clients. But she worried about business dropping off after she hired someone. “In business nothing is guaranteed,” she says. “It was a massive fear because you never know what’s going to happen from one day to the next.”

For Alicia Menkveld, owner of marketing business Radical Consulting, the fear came first. She just couldn’t seem to take the plunge to start a business in Australia, even though she’d already done it in her native South Africa.

So if you too are feeling the fear what should you do?

Being afraid is part of being human. Yet, as Roberts pointed out, business-owners often hide their fears. “Many businesses go through this and I think it’s not spoken about a lot.”

A chance meeting with a former boss gave Waring the push she needed. “She said I could either stop working for myself; get a Monday to Friday job where I would work less hours but probably earn the same, if not more money, but be unfulfilled. Or I could find someone to help ease the workload.”

Within a day 30-year-old Waring hired her first employee and she now spends more time on business development, which she loves.

As Menkveld wrestled with her desire to quit her job and launch a business, she found all sorts of reasons to play it safe. “I felt that here I needed more contacts in my network; needed to learn more about the culture of doing business and possibly needed an Australian qualification to give me more credibility before I could start a business.” Ultimately, she saw what was behind her inaction: she was afraid of not being good enough.

Roberts has identified 12 fears that affect business growth. Fear of failure; fear of success; fear of rejection; fear of looking different; fear of losing control and fear of not having enough just to name a few. Different fears will crop up as businesses move from struggle to stability to success to scale and exit, with success among the most challenging stages. “A lot of people are very scared of this place – success – and they sabotage it.”

For Menkveld it took nine months of working on her fear before she found the courage to resign. She pinned affirmations to her bathroom mirror; read self-development books such as Robin Sharma’s The Greatness Guide and focused on successful businesses started on a shoestring. Now when she is challenged by a large project or making a call to secure a speaking engagement, she moves through the fear a lot faster. “I say: what is the worst thing that can happen and if it’s not really that bad then I just go for it.”

Roberts encourages business-owners to develop a habit of making fast decisions, even when they’re perusing a restaurant menu. “The fastest way to remove fear is through making faster decisions.” His preferred technique: hold a decision you need to make in your mind; then imagine someone pointing a gun at your head that will go off within three seconds. “Just make the decision and what you’ll find in business is the faster you can make them the more clear and clean you feel.”